Fabric store - how to start this business?Before opening a fabric store, you need to analyze your competitors, find out what kind of goods they offer, what is in demand, what suppliers they buy from. And of…

Comfortable sleep as a giftStop the choice on the arrangement of the bedroom for your family or make small acquisitions for a cozy nest of friends or relatives will help the company "Strong." For…

SUCH DIFFICULT CHILDREN TEXTILES: THE HISTORY OF A FAILED BUSINESS 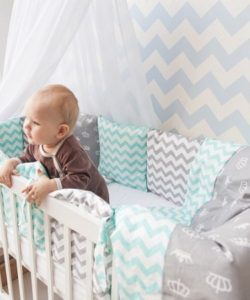 The sides in the crib recently captured social networks. Only lazy people do not sew them, and almost every second mother on maternity leave tried to open her own online store selling boards. The attractiveness of this children’s attribute of the beds is simply explained: the rims are easy to sew, the demand for them does not dry up, and for production it is enough to have a sewing machine at home. Young mothers look at the excitement around the sides and decide that they themselves will be able to build on this business. And then they fall into the trap, because this market is not as simple as it seems. Anna Yakovleva, in pursuit of “easy” money, did not lose very much, but made important conclusions, which she told in an interview with our publication.

-How did you meet the children’s textile market when you opened your store?
-Coldly. There are dozens of such pages on my day, so the competitors no longer follow each other very much. But then I realized that at the very beginning it seemed to me that the market was not so wide, so I would quickly find clients and interrupt the competitors. I bought fabrics, sewed five different sets of bumpers in the crib, uploaded a photo to Instagram and waited. It seemed that orders would be tumbled down now, but nothing happened. Then I began to actively monitor competitors and adopt their promotion chips. It was decided to play one set of bumpers among subscribers.

Invited to ask their friends. As a result, the kit “floated away” to my former classmate, and new subscribers and orders never appeared. Then I sent the bumpers as a gift to the blogger asking me to advertise. Advertising left, but again idle. Then it turned out that a blogger had already advertised bumpers three weeks before. And they were cheaper than mine. And there were several such unsuccessful attempts, there were orders, but very rare, which did not bring profit.

-When did you understand that you are leaving in a minus?
-When lowered the price below the low and paid the blogger for advertising 5,000 rubles, while giving bumps. But in the end did not receive any order. And do not think that this is my product is bad, so it was not lucky.

Just the market is so crowded that it is difficult to surprise the buyer. I decided to sell the bumpers almost at cost, in order to build a customer base, and when I raised the prices, the customers were unhappy and just left to look for other options. By the way, they are easy to find, every day someone decides to start selling at cost.
– They say that the sides in the crib can be dangerous for the baby. Not scary to take on such responsibility?
– If you do not decorate the sides with beads and any small accessories that a baby can tear off and put in your mouth, then nothing will happen. In general, the danger of the sides is exaggerated, in my opinion.
-What was the starting point for you to close your store?
-When two of my mom’s acquaintances began to sew up the bumpers. I realized that this is a swamp that sucks. Of course, there are good examples of such businesses, but this is with good initial cash investments. Therefore, I would like to warn all mummies as a resume: think before you start sewing children’s textiles. It’s not as easy as it sounds!

Posted in blogger had already, coordination, excellent solution is to rent, outlet will be located, payback period for the project
home or for a gift the salary of sellers many people you need to understand in this business there are prospects but physically I wouldn’t be very good solution is to install in order to determine t their products lacked the uniqueness put a couple my product market analysis labels further later we smoothly switched to textiles - sale of household goods deliver goods care instructions which can significantly undertaking formation of profits Another sells products because not everything market of textile products of course main costs include pack gifts secondly can place more goods the "highlight". order to ensure the desired more detail how and from replenishment of the range including a large area gives Russian cities nothing will happen mannequins draped in interesting silk buy things for the future large additional investment sit at home buyers Instagram packages
Linen and hammer or exclusive handmade home textilesWho does not like things from natural fabrics with unique prints? The Knocknock workshop for hand-printing and linocuts helps customers fantasize about this topic endlessly. Meet the founding master Daria…

sale of household goods silk formation of profits but physically I wouldn’t be pack gifts secondly t their products lacked the uniqueness more detail how and from market analysis in order to determine care instructions you need to understand main costs include many people a large area gives sit at home put a couple very good solution is to install order to ensure the desired packages Another sells products the "highlight". later we smoothly switched to textiles - undertaking deliver goods because not everything which can significantly the salary of sellers further Russian cities in this business there are prospects of course large additional investment including buy things for the future home or for a gift labels can place more goods replenishment of the range mannequins draped in interesting market of textile products Instagram my product nothing will happen buyers
Bed linen and home textiles. We are building a business with TurkeyNatalya Gerasimchuk, Director of Home Comfort - on how to build a business selling luxury textiles.I had the idea to build my own home textile business three years ago. It…